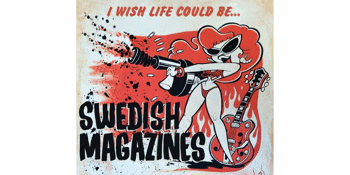 SWEDISH MAGAZINES AT THE OLD BAR

With guests WARPED, THE DEVOURS and THEE CHA CHA CHAS
The Old Bar (Fitzroy, VIC)
Friday, 3 December 2021 7:30 pm
37 days away
18 Plus
Music
Send this event to
Hailing mostly from Tasmania, and led by brothers Van and Cal Walker, The Swedish Magazines were part of a garage rock revival that flared up in the Melbourne music scene in the early Naughties and filled pubs again with exciting, high-energy, original action-rock too fast to dance to but great to drink and take drugs to, if somewhat dangerous to drive to.

Described as... an “out and out rocknroll onslaught” (Warped magazine) “a righteous tornado of party rock” (Beat Magazine) and “rocknroll oozing in its most primal form,” by Kim Salmon, The Swedes flew high before crash-landing in a melee of side projects and lead singer/songwriter Van Walker abundance of solo work.

"’Head on Ice’ is the great lost Oz rock song and one of the greatest recordings of the early 21st Century. It has all the hallmarks of classic Vanda & Young in terms of dynamics, swing and tone, but higher-energy levels. Have AC/DC recorded anything as good in the last 40 years? Maybe not. Van Walker, better known in some circles for his gruff folky stuff, is one helluva great rock’n’roller.”  Dave Laing, Dog Meat Records

Now with the help of Rubber Records, those lean years of blood, sweat and beer are being re-released,  and for the first time on vinyl.

(PRE-ORDER) Swedish Magazines - I Wish Life Could Be... Best Of Album - Rubber Records


ALL ATTENDEES MUST BE DOUBLE VAXXED